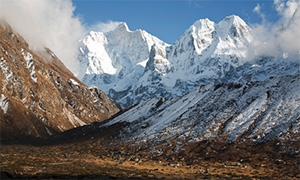 Kanchenjunga is translated as “Five treasures of the Snow” and the main peak is 8586m high. You trek to the base camps of the world's third highest peak. It provides you spectacular views of Jannu from the Mirgin La. The tranquil villages on the borders of Sikkim & Tibet add another dimensions to this trek This is a superb trek to the foot of Kangchenjunga (8586m), a huge massif situated in the far northeast corner of Nepal on the borders of Sikkim and Tibet. The region is one of the pristine high mountain areas in Nepal and your trek takes you through magnificent and varied scenery to the Base Camps on both north and south sides of this vast mountain.

Your journey to this area starts from the tropical lowlands through great rhododendron forests and lovely villages of east Nepal up to the glacier and overwhelming views. A trek to the south and north faces of the world’s third highest peak offers fantastic mountain views, including Everest. One of the most remote and beautiful areas in Nepal, which, unused to foreign visitors, still lies shrouded in mystery. The features of the walk in are pleasant villages with different ethnic groups then in the high regions, glorious mountains and abundant wildlife. The trails climb from 1200 meters (4,000ft) to 5180 meters (17,094 ft) above sea level. This is a purely camping trek. During a camping trip one gets to see various cultures, societies and the nature of the place along which one treads.

Detailed Itinerary of Kanchenjunga (South and North Base Camp -27 days)

Day 03: Trek from Basantpur to Chauki (2400m.) which takes about six hours.
The trail follows gentle ascent and descent route as well. The path is covered by rhododendron forests. If the sky is clear, you can enjoy the panoramic view of Mount Makalu and Kahnchenjunga himal. On the way, you can see some small human settlements. You can also see view of villages at the distance. Chauki is a small village with few lodges and Nepali tea shops.

Day 04: Trek from chauki to Gupha Pokhari (2940m.) to Gurja Gaon(2145m.) and it takes about seven hours.
While trekking through this way, you pass through rhododendron forests. At a point, you come across a pass situated at 3000 meter. There is a pond at the Gupha Pokhari where prayer flags and Buddhist mani wall can be seen. On the way from Gupha Pokhari to Gurja Gaon, you can see yaks and mountain sheep grazing in the jungle. You can observe some villages at a far distance. Gurja Gaon is occupied by Buddhist and Hindus. It is situated at low elevation.

Day 05: Trek from Gurja Goan to Dovan (730 m.) and it takes approximately five and half hours.
The trails descend upto Dovan. En route you pass through jungle and villages. You trek through terraces as crops grown here are wheat, maize, rice, millet, potatoes and so on. Dovan is a village situated at low elevation between two streams. There is a small market in Dovan.

Day 06: Trek from Dovan to Mitlung (921m.) which takes approximately six hours.
Crossing a suspension bridge over Tamur river, you follow quite flat route. You trek along the bank of Tamur Koshi through paddy fields. From time to time, you cross through small jungles of cardamom plants and other natural vegetation. You can see some small village stretching at a far distance. The inhabited area of this part is occupied by Brahmin, Chhetri and Limbu.

Day 07: Trek from Mitlung to Chirwa(1171m.) and it takes about seven hours.
The path to follow is quite narrow and passes through jungle mainly covered with cardamom plants and other vegetation. You can also see the small gardens of orange on your way. You cross through some small streams while trekking. This day your trek is through ascent and descent paths. You walk along the more flat land. Chirwa is a small town where you find small lodges and camping site with local shops. The people are mainly engaged in agricultural activities.

Day 08: Trek from Chirwa to Sekathum(1635m.) which takes about six hours.
Your trek passes through a small jungle along the bank of river. You find the plants of cardamom and other different vegetation. The trail normally ascends and descends as well. You cross a small hanging bridge before you reach Sekhathum. You spend overnight

Day 09: Trek from Sekathum to Amjilosa ( 2510m.) and it takes about five hours.
The first one and half-hour you trek through normally flat land. Then your trail goes steeply ascent up to Amjilasa. Amjilassa is a small village with few houses and yak herds with local shops where you find minimal supplies. These shops are also called Bhattis and teashops.

Day 10: Trek from Amjilosa to Gyable which takes about seven hours.
The trail is quite flat in the beginning and gently ascent to Gyable passing through jungle. There can be seen human settlement at Gyable. People living here follow Buddhist culture. You stay overnight.

Day 11: Trek from Gyable to Ghunsa (3468m.) which takes about six hours.
Your trails pass through jungle. You can see Gunsa river down the trail. The trail passes through few human settlements and it is clearly visible that their life style and culture has been inherited from Tibet. You pass through terrace fields where there are grown potato, wheat, barley, buck wheat and so on. The local traders are involved in export-import business in Tibet. The traders go to India for trade activities during the winter season.

Day 12: Rest day at Ghunsa for acclimatization
This is a day to rest in order to acclimatize and excursion in and around Ghunsa. Gunsa is also rich with Tibetan and Buddhist culture. Ghunsa is relatively larger town. It is inhabited by Tibetan people. Mainly the women are involved in carpet weaving profession. There is run Carpet Weaving Industry in their home at small scale by local people. The trekkers come across with few check point at Ghunsa. There are local shops where you can buy goods to take along with you at high altitude.

Day 13: Trek from Ghunsa to Kambachen (4124m.) which takes about seven hours.
The trail makes a gradual ascent along the south bank of the Gunsa Khola, then crosses a boulder strewn flood plain and crosses back to Rambuk Kharka on the north side of the river. Once on the opposite side, the trail passes a waterfall then makes a short, steep ascent to a very unstable scree slope. It's a passage across the slide, with loose footing, a steep fall to the river and lots of tumbling football-sized rocks. Beyond the slide, the trail drops to the single locked hut at Lakep, then traverses to Khambachen, a Tibetan settlement of about a dozen houses at 4040m.

Day 14: Trek from Kambachen to Lhonak (4780m.) and it takes about seven hours.
The trail climbs gradually through open rocky fields to Ramtang at 4240m, then across moraines north-west of the Kanchenjunga Glacier. Lhonak, at 4790m, is near a dry lake bed on an open, sandy plain; water is scarce here. There are no houses, but you can camp among the large boulders to get out of the wind. Terrific mountain views abound in all directions.

Day 14: Trek from Lhonak to pangpema(5152m.) which takes about four hours.
From Lhonak, the trail ascends gradually across the plain, then gets a bit steeper as it follows the moraine. You can drop off the moraine and follow the bottom of the valley to avoid the steeper section. The views are dramatic, but you cannot see Kanchenjunga or Wedge Peak until you are near Peng Pema. The spectacular main peak of Kanchenjunga, and a panorama of other peaks that make up one of the largest mountain masses in the world, tower over the single roofless hut at Pang Pema.

Day 15: Trek from Pangpema to Kanchanjunga (North) Base Camp (5280m.) to Lhonak and it takes approximately six hours.
Here you can enjoy the snow capped mountains and Kanchenjunga glacier. There are gorges of mountin glacier from water flows all the time. During the middle of the day, the scene of falling avalanches captivates you completely.

Day16: Trek from Lhonak to Ghunsa which takes about seven hours.
Now you trek in descending path crossing the jungle along the river Kambachen river. Somewhere you can see the mani walls and prayer flags hanging over the tree. At a point, you have to cross a wooden bridge.

Day 17: Trek from Ghunsa to Mirgin La(4583m.) which takes about seven hours.
Going ascend, you pass through the less thick jungle. Here also you can see the mani walls and prayer flags hanging over the tree. While trekking you see the view of various beautiful mountains. You observe the different animals like mountain goats and yaks grazing over the hills.

Day 19: Trek from Tseram to Oktang (5225m.) which takes about eight hours.
You trek through moraines. On the trail, you can see Yalung glacier and Lapsang glacier. You can also see mountain goats as you cross through desert like area. The view of snow-covered mountains and Kanchenjunga is quite magnificent. Walking through this trail is full of adventure

Day 20: Excursion to Kanchanjunga Base Camp (South) which takes about six hours.
The trekkers have to walk through moraines and strenuous rocky path. Trekking this day is quite adventurous as you have to walk along the glacier. You can see mountain goats and yaks. This day you cross Oktang glacier. The panoramic views of Kanchenjunga and Mount Jannu with other different peaks captivate you completely. Some parts of the area touch the neightbouring country India.

Day 21: Trek from Oktang to Tseram (3725m.) and it takes approximately seven hours.
You trek following stream alongside the moraines of Yalung Glacier. Trekking through jungle of juniper is required. The path is quite loose and rocky. There can be found mani walls and prayer flags hanging over the tree. Along the way, you can see difficult route of Lapsang La pass at a distance. There are very few stone roof houses at Tseram and yak huts.

Day 22: Trek from Tseram to Yamphudin (2090m.) which takes about nine hours.
The first part of the trekking goes along the bank of the river, Simbua Khola. You have to walk through jungle. On the way, you can see the landslide at some places. The trails normally ascend up to Lamite Bhanjyang and then descend to Yamphudin crossing the small river. Yamphudin is a mixed community of Sherpas, Limbus, Rais and Gurungs. Among the corn and rice fields of the village there are a school and some shops with minimal supplies.

Day 23: Trek from Yamphudin to Khebang (1740m.) which takes about seven hours.
In the beginning, you descend crossing the Omje Khola up to halfway. Now you ascend through the jungle of cardamom and orchid plants. You pass a small village where you can find different human settlements, small thatched roof houses and local shops with minimal supplies. From here, the trails is quite ascent up to Khebang Danda and then you trek in descending order to Khebang village. Khabang is comparatively big village where is found the people following religion of Hindu and Buddhism.

Day 24: Trek from Khebang to Thorpu (1500m.) and it takes approximately nine hours.
The trail starts descending to Jorepul and then begins to ascend. You also trek along the flat and low land crossing paddy fields and thatched roof houses. There are many villages on the way where you can buy the things you require from the shops in these villages. Thorpu is a town where transportation facility is available.

Day 25: Trek from Thorpu to Gopetar (2250m.) which takes about six hours.
First of all, you ascend through the small villages up to the last destination, Gopetar. It is a town where is found small restaurants, teashops and other local shops. From here, you pick your bus to reach Phidim to Illam.