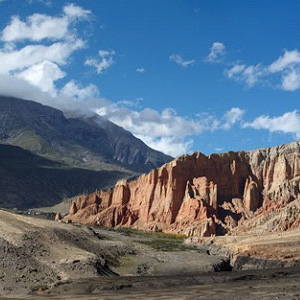 Nepal’s Mustang region preserves a life almost unchanged for centuries. It lies hidden behind the Himalayan giants of Dhaulagiri and Annapurna at the very roof of Asia on the arid Tibetan plateau. It has long been isolated from the outside world (and only opened to trekking groups since 1992!). As you make your way through this secluded land, you’ll pass brightly painted chortens (Buddhist shrines) and tiny villages guarded by enormous monasteries. Vistas include unusual and arresting views of the snow-covered Himalaya to the south, and desolate high plateaus, deep canyons, and an ocean of windswept hills the colors of a desert sunset to the north. Once at the walled capital city of Lo Manthang, you’ll absorb a great sense of timelessness and appreciation for an ancient culture as you discover the ruins of old forts, monasteries rich in art and history, and caves replete with magnificent religious statues.

Mustang is the old kingdom of Lo. Actually the capital of the Mustang district is Jomsom, but the real Tibetan style district lies north of Kagbeni and is usually referred to as Upper Mustang. The real capital, Lo Manthang, where the present king lives, is a fantastic square-walled town sitting on the ‘Plain of Prayers’. The small kingdom of Mustang, closed to westerners until 1992, is an enchanting land of windswept vistas, red walled monasteries, and feudal towns. This tiny kingdom was not only a major corridor of trade from the 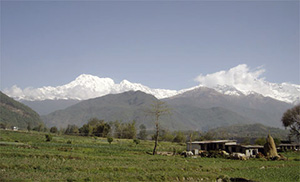 1400's to before the Chinese occupation of Tibet, but also figured importantly into early Buddhism in Tibet. Local legend tells the tale of the great founder of Tibetan Buddhism, Padmasambhava, who before building Samye (the oldest monastery in Tibet) came to Mustang to stand guard against and do battle with the evil powers out to destroy Buddhism. The temple of Lo Gekhar in eastern Mustang was built by Padmasambhava after his triumphant battle and still stands guard today.

Day 01: Drive from Kathmandu to Pokhara (914m.) about seven hours.
(alternatively, you can fly to Pokhara about 30 Minute). And stay overnight at Hotel.

Day 14: Fly from Jomsom to Pokhara about 25 minutes and stay overnight at hotel in Pokhara.

Day 15: Drive back to Kathmandu from Pokhara.