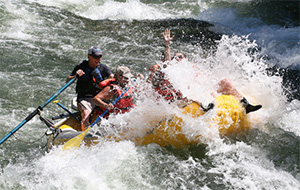 Nepal has four major river system with more than two - hundred fifty sizeable tributaries .The major rivers are: - The Sapta Kosi in the extreme eastern Nepali; the Narayani in the central Nepali; the Karnali in the western Nepal and the Mahakali in the far western Nepal. Arun rivers are one of the tributaries of river Sapta Kosi that flows in the Eastern Nepal. Besides being the only Hindu country in the world with all to myths and mysterious character, Nepal has more than one hundred different dialects speaking people belonging to various ethnic groups. Meeting there different ethnic groups of people during the rafting is all a part of adventure.

Day 02
Savaiya Khola Breakfast will normally be served at 8: 30 AM. Trek for about two hours at a gradual pace until Sabiya Khola. Briefing for the next day's schedule. Get the equipments ready to start early for the following day.

Day 03
Megan Besi As soon as we get on the river. From Tumlingtar, we get started at 9:30 AM after breakfast. Today is pretty smooth except for little rough ones of grade III/IV.

Day 05
Today is pretty smooth and relaxed compared to the previous days. The Arun River now merges with river Sunkosi to form in to a confluence of river Saptakosi, one of the major rivers of Nepal, which further flows to merge with the famous Gange in India. Float along Saptakosi for another half an hour and we reach the site of a temple in Bara Chettra a Hindu temple dedicated to lord Vishnu. From here, float for another half an hour to Chattra . Drive back.

N.B: Our river guides will give briefing every evening for the next day. So, any information not covered now by this itinerary can be discussed then.